I have conversations with people every week from organisations who are exploring new ways of working; some have just started, others have been experimenting for a few years. Here are some examples of complaints or laments they share with me. 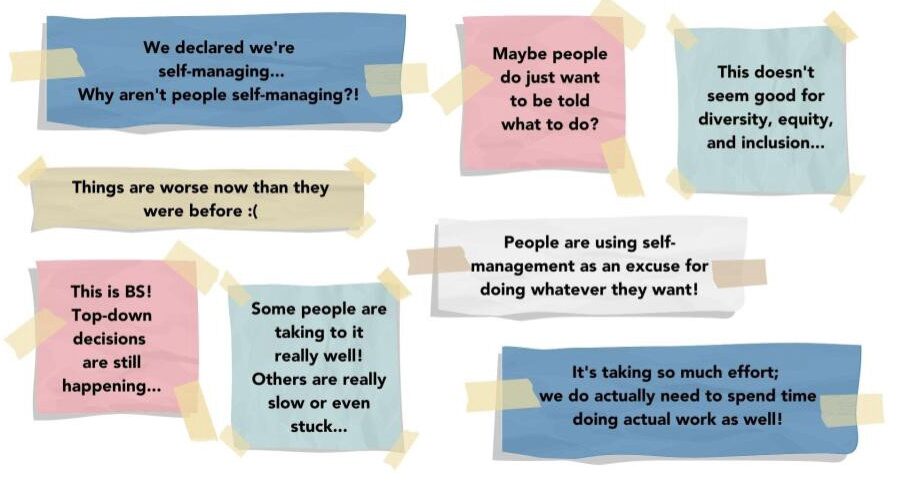 Do you recognise any? When I asked this at the Teal Around the World 2022 conference, I got a resounding “YES!” from many people in the chat.

What I also want to offer is: all of these struggles are not signs that self-management doesn’t work. Or that you’re doing it wrong. As Simon Mont writes: “it makes much more sense to interpret them as evidence that self-management is hard.” I want to be a stand for normalising these challenges.

Let me share two common approaches I come across when talking to and working with people who are exploring new ways of working. (I’ve exaggerated them a little to make them clearer.)

In this approach, those of us who are leading or invested in moving towards self-management relate to the process as being similar to installing software or an app. The mindset is: this new system will take care of everything. A lot of energy goes into educating people about the new system, and if they still don’t get it, convincing them that it’s a good idea.

The other approach I often see is people conflating (consciously or unconsciously) ‘bossless’ with ‘leaderless’. Anyone with power of any kind now feels constrained: “Am I allowed to say or do something if I see something is not working now we’re self-managing?” Anyone who historically hasn’t had power is now hyper-sensitive to anything that resembles leadership or hierarchy: “We’re self-managing now, everyone is equal!”

The limits of these approaches 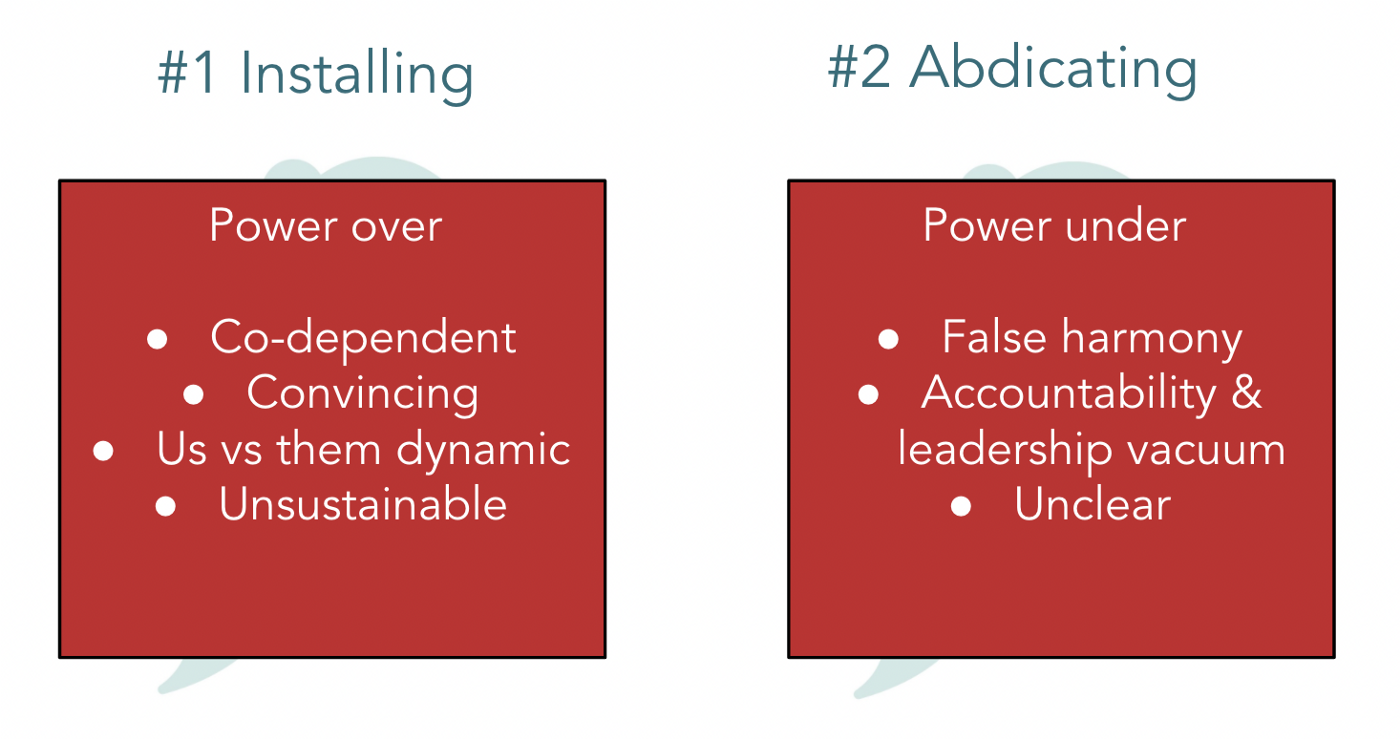 The limits of the ‘installing’ and ‘abdicating’ approaches

The limits of the installing approach is that, at best, you install an effective system, but people become co-dependent on the system or the people who understand the system. Most people haven’t really co-created anything and therefore haven’t developed the muscles to be fully responsible for the new system. When something isn’t working, the few ‘system engineers’ put their heads together (or search in the manual) to find a solution, instead of involving the group in addressing the issue.

In my experience it often also results in an ‘us versus them’ dynamic brewing between those who like and get self-management, and those who don’t. I’ve spoken to several organisations recently who have been practicing self-management for a few years now and this divide has grown so large that even uttering the word ‘self-management’ (like Voldemort) is taboo.

In summary, the installing approach is generally a ‘power over’ dynamic (to use Mary Parker Follett’s term).

With the abdicating approach, what ends up being created is a culture of false harmony where people tend to avoid disagreement; they don’t know how to hold each other accountable (without being boss-like); people tend to shun anything that looks like leadership or hierarchy. This looks like: decisions taking a long time, resentment brewing towards those who aren’t ‘performing’ because we don’t know how to talk to them about it, those with natural leadership feeling frustrated and stuck.

The abdicating approach is a ‘power under’ dynamic where nobody wants to or feels able to take responsibility for the whole.

One possible source of these approaches: a focus on ‘apps’

At the heart of both of these approaches, one interpretation is that both are focused almost entirely on the ‘apps’ that facilitate this new way of working. In other words, the structures and processes part. To be clear, I’m not saying structures and processes aren’t important: they absolutely are and we need to reinvent them if we want our organisations to shift.

However, a piece that’s missing is what my colleagues and I at Tuff sometimes talk about as the ‘Operating System’*. In our version of this metaphor, the Operating System is what we install the apps onto. If we install self-managing teams onto an OS that is a top-down, command-and-control paradigm, it’s going to be full of bugs or maybe not work at all.

“The most common reason why self-managing teams don’t work is the skills and the attitude of the management team. If you see it as a trick of changing the structure, it won’t work. It’s a mindset.”– Jos de Blok, founder of Buurtzorg, at Teal Around the World, 2022

What I would like to offer is a third approach. It’s not the answer, of course, but an alternative that I think could add value. My colleague Karin Tenelius calls it ‘unleashing’ where the purpose is to try and set free the potential in a group. The potential that is already there and unique to that particular collective of human beings.

An unleashing approach to new ways of working is bossless, but leaderful

In this approach, leadership is a real contribution but not in a parent-child or top-down way. It is leadership in a coaching or facilitative way, inquiring and listening for what wants to happen in a group, what’s in the way, what’s needed to move things forward. It is ‘power with’ – anyone at any moment adds value by stepping up and challenging or asking questions about something that isn’t working, perhaps humbly offering a proposal, and listening for if there is energy to try it out.

It is about both psychological safety and accountability. This combination creates what Professor Amy Edmondson refers to in her book ‘Teaming’ as the Learning Zone.

How to equip ourselves for the ‘unleashing’ approach

Here are some tips I can share that I believe help to get us into the ‘unleashing’ mindset. 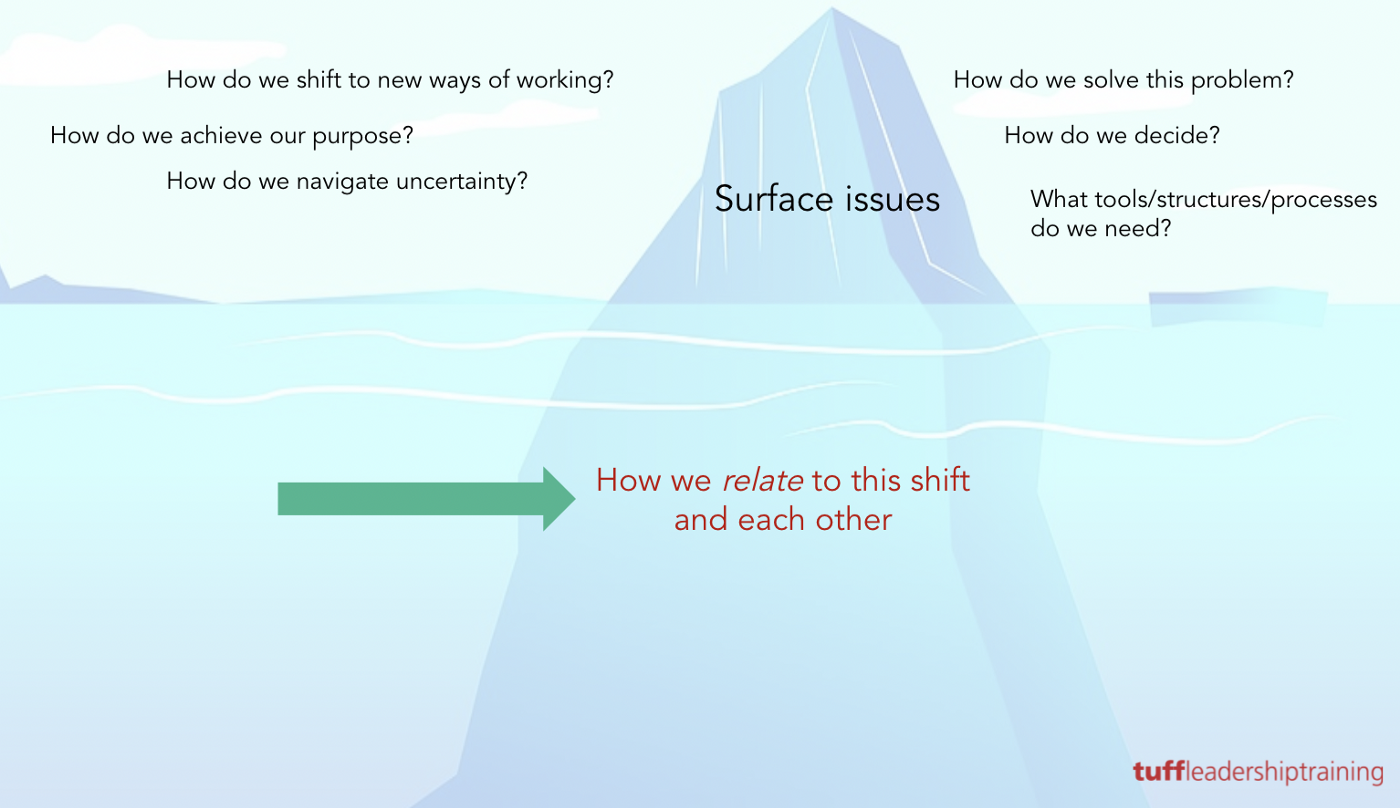 All of these skills are in the domain of what’s ‘under the surface’, which is to say: how we relate to this shift and each other. If we can also focus on these things, and talk about these things, it unlocks and unblocks new energy, creativity, levels of trust, and responsibility.

Some final tips for the journey

Note: Other people have also used this metaphor of Operating System, for example, Aaron Dignan and the good people at The Ready. We use it in a different way. I hope we can come up with a less computer- or machine-oriented metaphor one day but for now, it’s the best we could think of!

If you enjoyed this blog, you’ll probably also enjoy the book I co-wrote with Karin Tenelius ’Moose Heads on the Table: Stories About Self-Managing Organisations from Sweden’, as well as the podcast I host called Leadermorphosis, featuring practitioners of new ways of working from all over the world (including some of this movement’s celebrities like Frederic Laloux and Jos de Blok).

Also, if you’re interested in training in the mindset and skills needed to have self-managing teams work, check out Tuff’s courses here.

Inspiration for this blog:

This website uses cookies to improve your experience while you navigate through the website. Out of these, the cookies that are categorized as necessary are stored on your browser as they are essential for the working of basic functionalities of the website. We also use third-party cookies that help us analyze and understand how you use this website. These cookies will be stored in your browser only with your consent. You also have the option to opt-out of these cookies. But opting out of some of these cookies may affect your browsing experience.
Necessary Always Enabled
Necessary cookies are absolutely essential for the website to function properly. This category only includes cookies that ensures basic functionalities and security features of the website. These cookies do not store any personal information.
Non-necessary
Any cookies that may not be particularly necessary for the website to function and is used specifically to collect user personal data via analytics, ads, other embedded contents are termed as non-necessary cookies. It is mandatory to procure user consent prior to running these cookies on your website.
SAVE & ACCEPT